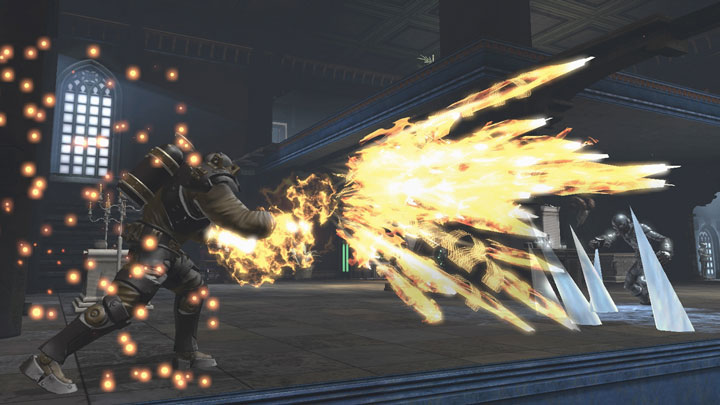 How will you protect the DC Universe? Choose from 15 incredible and distinct powers to wield that will define your character in DC Universe Online!

Fire
The power of flame allows you to shoot gust of fire creating massive damage to those nearby. Also utilize fire to protect yourself and allies on the battlefield. You will use Immolation and Ignition to dictate your presence in The Universe.

Ice
Ice gives you the power to use subzero temperatures as your line of defense. Mastering Ice allows you to shape weapons and blast enemies with arctic blasts and winds. Utilize the Cryogenics and Storm instilled within you to hone your craft.

Earth
Take the side of Mother Nature. Summon mighty animals or let the forces of Earth wreak havoc to the battle field. This tanking ability relies on Geokinesis and Seismic attributes whether hailing an earthquake or Crystal Golem.

Rage
Unleash your inner Rage to destroy everything in your path. Become an unstoppable force creating energy blasts, plasma attacks, and brutal constructs. Utilize your Anger and Punishment to gather attention and lead the front line attack.

Controller
Immobilize your enemies and regenerate your allies.

Mental
Manipulating the environment with your mind has never been more fun. Attack and control others by psychic power or at your own will. Whether using Telekinesis or Illusion, you will always be one step ahead of your enemy.

Gadgets
Bring innovative weapons and tools to the battlefield. These clever devices can be used to distract opponents or lay-and-prey for an unassuming enemy. Tricks and Traps are cunning tactics to manipulate any playing field.

Light
This is your go-to power to support front-line combat. Use will or fear to create hard-light constructs to control or punish enemies. Massive damage is at your disposal when the fight gets tough. Having Support and Assault is a great choice for you and your allies.

Quantum
Manipulate time and space throughout the Universe. Slow opponents, change density, or teleport your way around enemies. With Time and Space at your disposal, Quantum Tunneling and Time Bubble’s are now a reality.

Munitions
Become the head of the armory. Mastering explosives and ballistics will have you locked and loaded for any situation. Having both Guts and Glory lead to bigger guns and bigger explosions to run and gun a pathway of destruction.

Nature
Make the most of your primal forces and embrace the help from your environment. Adapt to situations and terrains by shifting into beast forms or by taking plant life to heal yourself and others. Take Fauna and Flora to get in touch with your natural surroundings.

Sorcery
Take command of both life and death on the battlefield. Use your unseen forces to introduce attacking arcane creatures, or generate karma to influence friends and foes. Having Summoning and Destiny provides a powerful, manipulative influence in The Universe.

Electricity
Surround yourself with the power of lightning. The voltage running through you provides jolts of life to your allies, while shocking nearby enemies. Take the Voltage and Amperage instilled within to pull off Tesla Blasts, Arc Lightning attacks, and Overcharge abilities.

Celestial
Perform blessings and rituals to shape how The Universe runs. Bless allies and curse your enemies to gain the upper hand. Use both Blessed and Cursed to distribute divine and dark powers during battle.

Water
Keep your allies alive with powerful storms and flowing water. Command water in and around allies and enemies. Bend and blast water into incredible streams and torrents to unleash a flood of destruction, or shape it into awe-inspiring constructs to wash away your enemies in the Damage role. Soothe the wounds of your allies or envelop them and yourself with the shielding power of water in the Healer role.