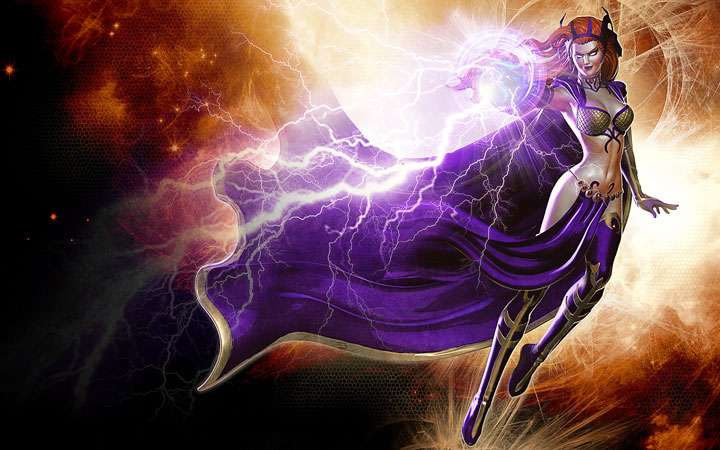 You’re off Brainiac’s ship and enjoying a little R&R in Sheeda’s Den, one of Metropolis’ night clubs. Good for you. But as Calculator says, it’s time to get to work. Circe, your mentor, is counting on you, and Blood Priest Streg is waiting with instructions. Believe us, you don’t want to keep a Blood Priest waiting…

Doctor Fate and his Sentinels of Magic have set up barriers in Chinatown. But their magic is no match for yours when you have the Goddess Circe on your side, right? Let’s show them what real magic looks like. Head out of the safehouse and into the streets of Metropolis to begin the first leg of your mission.

Once outside, use your minimap and follow the yellow arrow to the west. This will lead you to Chinatown, which according to Circe, is built on top of an area of serious occult magic. Don’t worry; you can handle Doctor Fate and the Sentinels.

While here, Calculator is also going to introduce you to Cultist Server, who will give you an additional side mission: School for Scandal. There are multiple side missions available, but we’re only directing you to this one. You can find the others (just look for the giant yellow exclamation points!).

In both Fateful Demise and School for Scandal, your job is clear: take out the apprentices and mentors. There are specific instructions in your Journal; complete them all to be handsomely rewarded.

The apprentices have been relieved of their wards and their spellbooks, and the mentors have been cursed. Time to venture deeper into Chinatown to meet with Brother Blood’s Cultists. They’re on the roof of a nearby hotel; speak with the one in charge to receive a special gem.

This gem, according to Circe, is going to help you drain to souls of the innocent just north of here, so that you can bypass the Sentinel’s magic and go after the Eye of Sin.

Keep in mind, not every Citizen is pure of heart. What can we say, Jake? It’s Chinatown. Listen carefully to what they’re saying; it might give you a clue as to who the innocents are, and who is going to be a waste of time.

Once you’ve got enough souls, head west again. Up the street, just past a café, you’ll find an entrance that will allow you to pass through the ward and into the Sentinels of Magic’s base. Feel free to ignore the Maitre’d and citizens; they’re of no use to us now. You will need to fight the Sentinels as you make your way to the Eye of Sin’s location.

In the three antechambers surrounding the Eye, you’ll have to reposition the flames. Use your mini-map to find the white dots; these mark your objectives (in this case, the flames to reposition). You’ll need to pick them up and move them to the containers that encircle the eye. Then, you’ll be able to steal it!

You have the Eye of Sin (which, it should be noted is not ACTUALLY Trigon’s eyeball…thankfully…), and now it’s time to head back to Chinatown and begin converting people into Wrath Demons. Why? You don’t want the balance of power to stay with those annoying Sentinels, do you? “Avoid darkness,” “You know not what you do!” Ugh! Who needs that? You and Circe certainly don’t.

There’s a Magic Festival happening in Chinatown. What a perfect location to unleash the power of the Eye. Follow your mini-map southeast to get to the center of the action.

Once you have enough citizens changed over to your side as demons, head to Big Belly Burger. And no, not for a snack. It’s time to put their wrath to good use – your use.

Well, well. Seems like those Wrath Demons enjoy following your command. Nice work. Now get into the Sentinel’s of Magic citadel and seek out the Ankh of Power. The Wrath Demons will be there too to help you defeat those waiting inside.

As you make your way through the citadel, you will eventually come to the Ankh of Power. Once you’re able to reach it, it is time to come face to face with Doctor Fate. Brother Blood will join you for an epic final battle. Do not underestimate the power of Fate, of course. You must avoid his attacks as much as you deal your own.

With Brother Blood’s help, you defeat Doctor Fate and help open the gateway to begin the ritual for Trigon!

Head south to the safehouse (Sheeda’s Den, the Chinatown nightclub), where Brother Blood is waiting for you with excellent news – the ritual has worked, and Trigon will rise! Circe is impressed, and wants you to continue in her magical service. Are you ready for more?