FACE THE ULTIMATE PARADOX THIS APRIL IN "WORLD OF FLASHPOINT"

DC Universe Online's next episode features an impossible, time-twisted reality inspired by DC's iconic Flashpoint storyline. In this tangled timeline, the few surviving Super Heroes are caught up in an all-out war that threatens to shake the Earth to its core. It's up to you to stop the battle, bring foes together, and fix the timeline.

The new episode WORLD OF FLASHPOINT will launch in April 2021. 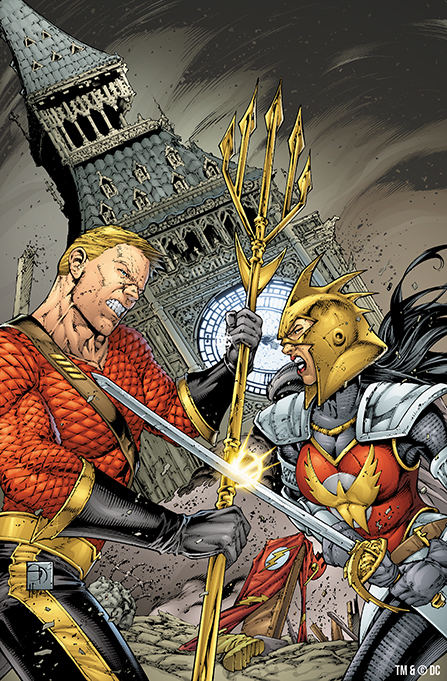 The time-trapped Anti-Monitor's revenge! The greatest paradox of them all, Flashpoint, has been pulled into our universe. In a world where Super Heroes have turned against each other and Professor Zoom has embraced a world-ending Paradox, who is left to fix the timeline?

Emperor Aquaman leads Atlantis in a war against Queen Diana and New Themyscira. Thomas Wayne - Batman - is barely holding Gotham City together. The Flash and his allies are racing to undo a critical paradox, but they still need someone from the future to leverage enough Speed Force to see it through.

In WORLD OF FLASHPOINT, it will be up to our timeline-anchored Super Heroes and Super-Villains to intercede where they can before the world we know disappears.

LANDON'S TAKE: "I was so excited when we settled on adding Flashpoint elements to our Anniversary event. After that, I just needed to see Thomas Wayne as Batman in Flashpoint Gotham City, and the team nailed it." - Landon Falls, Senior Producer

ROB'S TAKE: "We’ve been leading up to the World of Flashpoint for some time now, starting back in Wonderverse, and finally the pay off is here. I love how the episode spans the globe, bringing several stories from the comics together in new ways. That varied approach makes the whole feel bigger with higher stakes." - Rob Frazier, Lead Content Designer

JACK'S TAKE: "Flashpoint was the first time that The Flash really stood center stage, and I'll never forget that. While always a core member of DC’s roster of heroes, it was Barry Allen’s quiet heroism that protected Central City day in and day out. His biggest contribution had been his sacrifice during the first Crisis on Infinite Earths, but Flashpoint illuminated Flash’s rich personal history and his enduring effect on the DC Multiverse like never before." - Jack Emmert, CEO

THINGS TO KNOW ABOUT WORLD OF FLASHPOINT:

EPISODE 40: WORLD OF FLASHPOINT will launch in April 2021 on PC, PlayStation 4, Xbox One, and Nintendo Switch.

Questions or comments? Join the discussion on the official forums!

DC LOGO and all related characters and elements ™ & © DC.