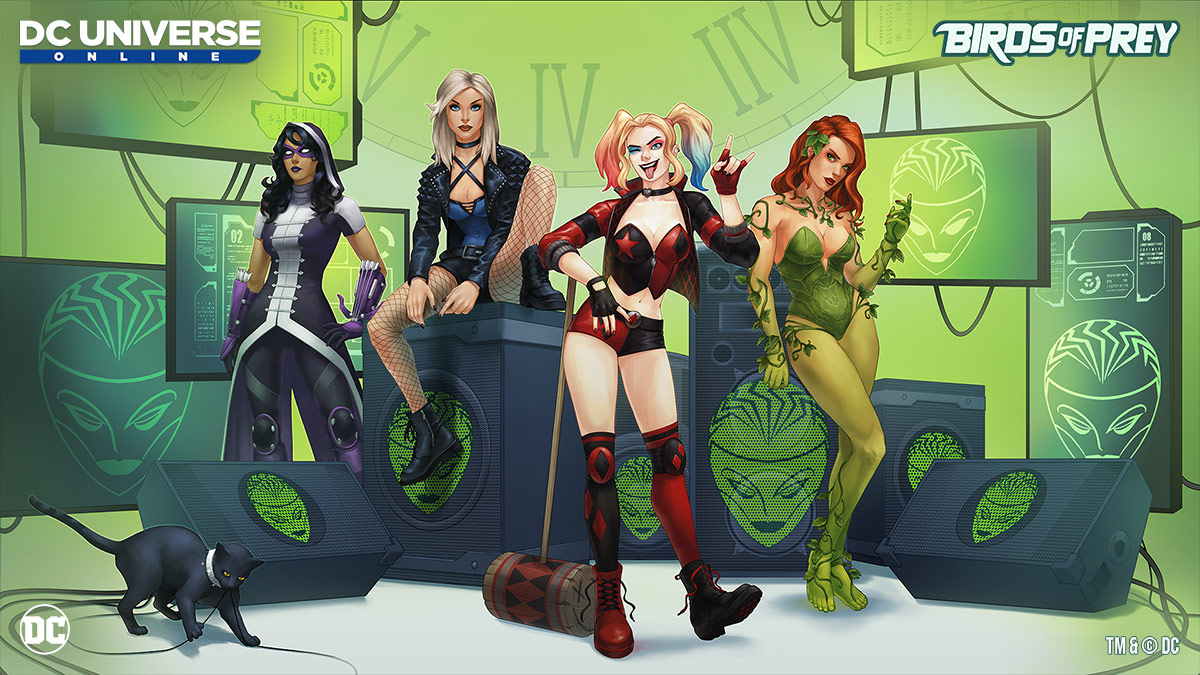 Metropolis has descended into a battle royale due to the machinations of Lex Luthor. Is Luthor dead or alive, and what’s his master plan? Team-up with the street-level heroes and villains of the Birds of Prey team: Black Canary, Huntress, Catwoman, Poison Ivy, and their newest member - Harley Quinn - to find out.

Travel from Metropolis’ burning LexCorp Tower to Luthor’s hidden lair, and for the first time: Oracle’s Clock Tower HQ! You never know what to expect where Luthor’s involved, so be ready for anything, from Lobo to Amazo to Brimstone: a towering threat from the heart of Apokolips!

To play this content your character must be level 30 and have a minimum Combat Rating of 287.

For a limited time, special “Event” versions of all content in Birds of Prey will be available to all players level 15+ as well! Look for these Event versions in the Events tab of your On Duty menu.

Metropolis descends into a battle royale after Lex Luthor broadcasts to the world that he's leaving his wealth, technology, and weapons to anyone willing to take them. Crime is rampant and the Birds of Prey are on the case! Each of the Birds of Prey has a mission for players in the new open world. For example, Heroes will help Huntress fight crime while Villains partner with Catwoman for a piece of the action!

An explosion at LexCorp Tower causes a mad rush for Luthor's tech and spurs an investigation into Luthor's fate. Heroes find H.I.V.E. harvesting what they can while Villains work to prevent A.R.G.U.S. from taking Luthor's tech. Work with Superman and the Birds of Prey to battle your way to Luthor's inner sanctum.

Follow intrepid reporters Lois Lane and Jimmy Olsen as they investigate Luthor's hidden lair. No one's shocked that Luthor built a volcano lair, but he has plenty of surprises in store for uninvited guests!

You’ve received a distress call from Oracle! Lex Luthor has initiated a direct attack on her safe house, the Gotham City Clock Tower, and has taken control of Oracle's security measures, turning them against her. Get to the Clock Tower and protect Oracle from her own technology and from a new danger even she never saw coming!

Lex Luthor’s plans have finally come to fruition and they're not good for anyone. Battle Luthor in the heart of his volcano and discover the world-killing threat he’s been working towards this entire time!

Questions or comments? Join the discussion on the official forums.

It's contest time! The Birds of Prey are a new team, and they will need your help to come together. We are looking for players most dedicated to the group!

The team will choose the most creative and thematically appropriate screenshots, and the top four winners will each receive one (1) Royal Chroma Mega Pack (ARV US$25.00)!