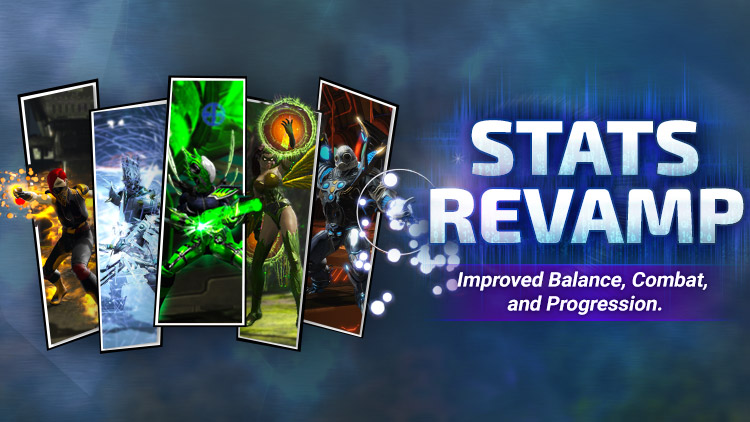 The Stats Revamp is live, and we are incredibly thrilled with the response thus far. Change is never easy, however with it comes a new foundation for DCUO that puts it in a good place for the future. Recently, we also announced the upcoming launch of the Water Power Set, and our next two Episodes, Riddled with Crime and Earth 3, at San Diego Comic Con. And we hope to have more updates very, very soon on all these efforts and others! We cannot wait to show you everything we’ve been working on!

That said, and as expected, we are getting TONS of feedback now that we are live. We have been reviewing this feedback carefully. One thing that I stressed to the team, and that I did not want to make the mistake of doing, is reacting too quickly before fully understanding the feedback and how to address the core of the problems. Often, an issue may seem obvious and you fix that thing, just to realize later that the issue wasn’t really what you thought it was at all, and you now have a brand new set of problems.

So about that feedback! Yep, you’ve been vocal. We are totally listening. For starters, it’s great to hear people note that they feel the power sets are well balanced, how varied loadouts and abilities are, and seeing stats and gameplay mechanics actually matter!

We still have some work to do however. We have noted some of the most constructive feedback is coming from players feeling content is too hard or takes too long, or from those feeling your characters are less powerful. This feedback manifests itself broadly in different ways, and the specifics vary from player to player.

SOME of this is good. Gameplay mechanics exist for a reason – they are a key part of the fun and the challenge of the game – and pre-revamp too many of them could be entirely ignored. Many of you are adjusting to and relearning these mechanics you never noticed or have forgotten, and that is good long term and especially in the most advanced end-game content.

SOME of this is not as good. We don’t want newer or mid-game players struggling through challenges, and we want everyone to feel that progress and character strength noticeably increase. So, onto our plans!

In The Short Term

So, having heard this key feedback, here are our immediate plans to address these areas of concern.

In The Medium Term

Looking a little bit further out, your feedback has reminded us it’s time to finish updating the whole game’s gear and progression systems to modern content standards. We will (finally) rework the vendor currencies in the earlier parts of the game to match more closely our current end-game, in an effort to more holistically introduce all players to these new avenues of progression and alleviate lingering frustrations.

In The Long Term

So what about the long term? Bam, here’s more!

We’ve made stats matter and therefore Skill Points are in demand. Arguably, if you’ve not been chasing those points, you might not know the best way to go about earning more. Additionally, those that have a high Combat Rating but few skill points may feel like they are less powerful now, which is exacerbated by content also being more challenging.

We assumed, and many of you assumed, that content felt harder after the revamp because players didn’t have the skill points they needed. After careful review, this really isn’t the case. The core of the issue is the content and that’s why it comes first in the plan. (This is precisely what I meant by waiting to understand the core before addressing an issue.)

However, navigating our Feat system is a...feat...in and of itself. It is difficult at best to decipher what feats mean, or where to go and what to do to complete them. They're achievements, and fit in that perspective, but it can become frustrating when achieving those feats is part of your progression.

In the long term, we will be exploring ways to solve this problem, both in improving the clarity of feats and in eventually providing other avenues to gain skill points. MORE ON THAT LATER!

For now, let me sign off by saying again that we appreciate your participation and all of your patience as we work to make DCUO the best it can be.

P.S. Oh, also? We TOTALLY hear you about how tedious it can be to re-spend skill points one at a time. COMING SOON: