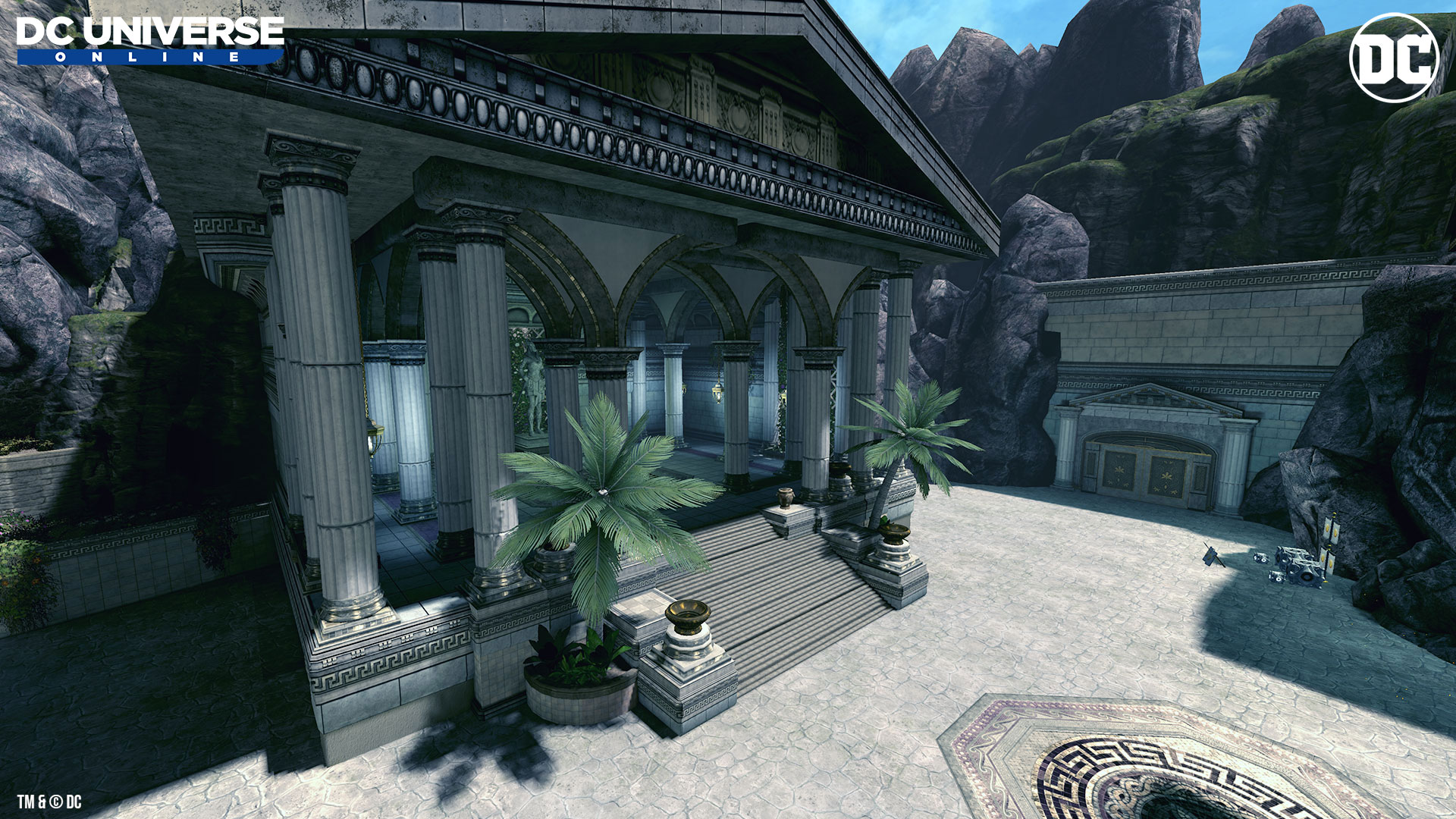 Episode 38: Wonderverse is due to launch this August, and today we would like to share what we have been working on for the open world. Beyond being enormous, this episode's open world Themyscira will have more content, more rewards, and a new approach. Read on!

Starting with the story and characters, this episode just demands to be massive. Multiverses are colliding, the Source Wall is cracked, not one but five Wonder Women are on the job. The gods are desperate.

Massive is what MMOs are all about, so we took this opportunity to deliver just that with a new approach to the open world (and the episode overall). As NerdOfPrey (DCUO Creative Director) puts it: "Persistent worlds in MMOs make some of the most memorable experiences. The action is social, more chaotic, and emergent. You never know who you will run across, who you can help, or who might help you."

Our goal with Themyscira is to bring out that persistent MMO vibe. We hope it will become more than just a place to run your daily missions (alone), and instead a meeting place like your local coffee shop or pub or comic book store. And unlike the Watchtower or Hall of Doom, our goal is for you to always have something more to do while you're there.

More to do means more content. In open world Themyscira, we have created new and complex raid-like boss fights. Like but also very unlike bounties or previous bonus bosses, these boss fights will feature even more interesting mechanics, crucial additions to the episode's story, and their own rewards.

"We wanted to reintroduce some of that old-school MMO experience, tough battles and scary bosses you can walk up to," says JackFrost (DCUO Content Designer). "Unlike much of our On Duty content, you won't have to queue or find your group before getting started. All you will have to do is go to Themyscira and join in."

"These are big raid-like fights for players to tackle together in the open world, not locked away in an instance," Charon (DCUO Content Designer) adds. "And before anyone asks, these bosses will scale to some degree based on the number of players available to keep things interesting."

"These are big raid-like fights for players to tackle together in the open world."

One important note is that you can also fail a world boss fight, and individual contribution beyond raw damage will matter when it comes to rewards. You probably won't want to dive in recklessly, but also you definitely won't want to hang back and let others save the day. That said, even if everyone fails to defeat the boss, you may still get lesser rewards based on your contribution.

More content means more rewards, with one fundamental difference: no loot locks. These world bosses will (have a chance to) drop certain items directly, including styles, base items, and more. Additionally, they will drop a secondary episode currency that can be spent at a new vendor.

"The new Empyrean Aether currency and vendor are what I am most excited about," says RedFive (DCUO Systems Designer). "You can run these world bosses endlessly, keep getting rewarded, and then use your pile of Aether to purchase red-hot new items. If you want to be the best most awesome, look for the Elite-quality weapons and jewelry, and look for the Legendary-quality generator mods."

"No loot locks. You can run these world bosses endlessly."

Adding these rewards without loot locks was very important to our new approach to the open world. With much of the game eventually running up against waiting on loot locks to reset, we wanted to make sure you could still always have more to do if that's what you want.

Jack Emmert (Dimensional Ink CEO) puts it best: "When the team came to me with this idea, I was all for it. I personally LOVED the Metahuman Experiment and Calculator Bot runs in Birds of Prey. They were so fun and brought me back to earlier days of MMOs, waiting for spawns to pop and gathering with friends and strangers in anticipation. I never wanted to log out."

After what seemed like hours of Jack recounting stories of his exploits in Birds of Prey and classic MMOs, he continued. "You know Wonder Woman has always been associated with Greek mythology – and what’s more in tune with that than a number of heroes grouping together to bring down rogue gods and monsters?"

What indeed? Especially when the rewards never run out.

So just who are these bosses and what do the fights entail? Check back soon as we reveal more about the episode in these weeks leading up to launch, and make sure to join us on the test server when the time comes. We will be looking forward to your thoughts and feedback.

And for those of you already asking, yes, the episode will still have a solo, an alert, an over the top raid, and all of the the daily and weekly missions in the open world you are accustomed to when the episode launches this August.

Questions or comments? Join the discussion on the official forums!
Previous Article
Summer Sale!
Back to List
Next Article
Bonus Catalyst Week & Gift!