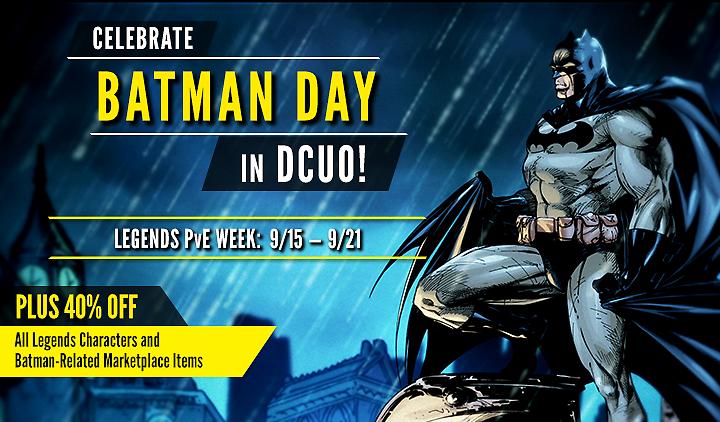 Saturday, September 17, 2016 is an auspicious day in this part of Gotham City (and the whole DC Universe). It’s Batman Day! Batman appears in many forms in DCUO; revisit our feature from last year to see him in his many in-game forms.

This year, in honor of the truly legendary Dark Knight, we have some special happenings inside DCUO! But rather than limit them to a single day, they’ll be occurring for nearly an entire week – from Thursday, September 15 through Wednesday, September 21, 2016.

Batman is the quintessential Legend. So this week all Legends PvE events are open for all players! Ready to head to the South Gotham Courthouse? Think you have what it takes to tackle Area 51? Will the Hall of Doom or the Paradox Wave prove to be your undoing? There are twelve events in total that you can attempt during the Legends PvE Week, from September 15 through September 21, 2016!

In addition to the Legends event, if you head to the Marketplace you’ll find that Exobyte Data for all Legends characters are on sale for 40% off! Ever wanted to experience Legends content as Future Batman? Maybe Bombshell Catwoman? Or Arkham Asylum Joker? These and more will be available during our weeklong sale.

And if that weren’t enough, we’re also marking Batman-related items in the Marketplace down 40% as well! This includes base items (like the Batcomputer & More Pack), style items (such as the Batman Cowl Pack), toys (the Batman bouncy ball!) and more. Get Caped Crusader style and decorate your personal Batcave to match, all at a great discount.

We’ll have news about this ON Batman Day, September 17. Check the DCUO forums and follow @DCUO on Twitter to see the details and to enter!

Now, it’s time to be the hero (or villain) that DCUO deserves. Head in game and start celebrating Batman Day in Gotham City and beyond!