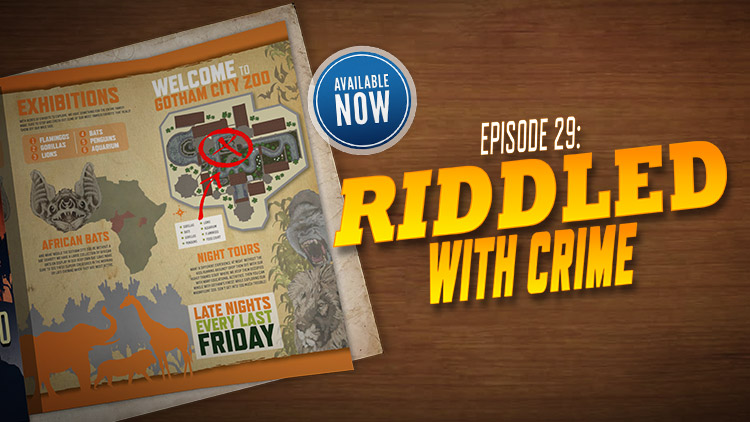 A gang war is brewing between the Joker and the Riddler, and has pulled in some of Gotham’s worst of the worst to choose sides to ally with in an epic power struggle! This is bad news for both heroes and villains alike, so you’ll need to work with the likes of Batwoman, Nightwing, and even the mysterious Talia Al Ghul to help the GCPD with containing this conflict before it tears Gotham City apart. The episode features new missions in a new open world environment, two new duos, a new alert, and a new raid (with an additional Elite version)!

Earn new feats, discover new collections, and fight for new high-level gear inspired by the Riddler and more! To get started, look for Riddled with Crime in your Mission Journal, once you have the required Combat Rating of 197. Riddled with Crime is free to access for Members.

The Riddler has taken Amusement Mile from the Joker, the first move in a potentially devastating war between two of Gotham’s most wanted. Now the rest of Gotham’s most notorious villains are getting involved and choosing their sides, creating one of the biggest gang wars that Gotham has ever seen! Help contain the devastation before it rips the city apart.

Both the Joker’s men and the Riddler’s men are taking over strategic locations around Gotham. Choose your side carefully (or play both sides) and help stop the other side from gaining too much ground in this deadly turf war!

A WayneTech warehouse is being robbed as the gang war spreads further into Gotham City. Whoever controls the technology of WayneTech will surely prevail in this deadly game of chess. Prevent the shift of power, and find out what mysteries lurk behind this gang war.

All is finally revealed with who is behind this gang war in a final showdown at the Gotham City Zoo! It’s up to you to stop their nefarious plot and save all of Gotham from a fate too terrifying to imagine!

Riddled With Crime has a limited-time preview of the Amusement Mile Gang War for all players, regardless of Combat Rating or access level. Anyone can zone in, play, and progress in this open world version of Gotham City.