Hello Heroes and Villains! Please read on for your May 2022 Development Update to learn more about some changes to our plans, what the team has been up to, and what's next for DC Universe Online.

Wow, what a spring. February kicked off the Valentine's Day seasonal event, followed by the Mister Mxyzptlk's Mischief event in March, and then the Springtime event in May. February also brought us the Joker's Legacy Time Capsule, featuring the Bombshell Harley Quinn Ally, which was then followed by a Resurgence Mega Capsule in April, featuring the Reactive Mearcian Auras.

Game Updates brought us improved Omnibus balance and scaling for elite content, the base vendor and trinket dispenser, and better user interfaces for Daily Rewards and Custom Play. Speaking of Doctor Fate's Daily Rewards, there were a ton of them! Remember, if you happened to miss any rewards, they will eventually appear on the vendor directly. Oh, and of course, April also brought us the Death Metal Batman Ally, because we just couldn't resist those sick riffs.

Saving the best for last, Episode 43: Dark Knights launched this April, featuring Perpetua and the climactic finale to the Metal saga. If you haven't jumped in to experience it, please do! All of our episodes are free and easier event versions of the content are fun for everyone.

NEXT ON DCUO: JUNE-AUGUST

This summer will of course see the return of the Tides of War seasonal event. I am also happy to announce that we will see the return of both Save the Universe and Survival Mode. Survival Mode is especially interesting this time because we're aiming for this to be our first ever 6-person content. A 'Ralert,' if you will. An 'Araid,' if you won't. ...we're still workshopping what to call it.

Survival Mode is especially interesting this time because we're aiming for this to be our first ever 6-person content.

Daily Rewards will continue monthly, with June featuring the highly anticipated and community-voted Blue Beetle gear suit and vendor additions, including stabilizers and ally favor. I can't wait for everyone to get their hands on that suit. Speaking of things the community has requested, we will also see the launch of two new Allies: Superman and Krypto and a 'remixed' Booster Bundle. It is what it sounds like!

We will also celebrate Pride in DCUO with our June update. Look for new gifts to claim, display, and wear to show your support. Previous years' gifts will return, too, if you missed any.

NEXT AT DIMENSIONAL INK: JUNE-AUGUST

We will also continue work on a new 'homecoming' seasonal event and, of course, Episode 44.

I do need to update everyone on a few things we won't be working on quite yet, despite previously planning to.

We won't be working on a new lair for now, and we won't yet be working on the new feature system we had planned to launch this fall. We do still intend to work on other smaller systems this year, including some lair improvements, but I will have more on that in my next development update.

I also want to call attention to Episodes 44 and 45. Episode 44 is now planned to launch this October and Episode 45 will launch early next year. Work has already begun on 44, but we would not have been able to meet our previous deadlines due to some recent staff shortages. Our new event, Save the Universe content, and Survival Mode will help fill the gap and keep things fresh.

We are hiring! Tell your friends.

Now that said, one thing the whole team will be spending more time on over these next few months? Hiring. We are hiring! Tell your friends. We have all sorts of positions open and new folks are steadily joining the team. Even so, it takes time to ramp up to full capacity and efficiency, making these schedule adjustments unfortunate but necessary.

Again, if you have what it takes or know someone that does, hit our careers page for more information.

NEXT ON DCUO: SEPTEMBER - THE FUTURE

This fall, we will see the launch of Episode 44, the new seasonal event, the traditional fall and winter events, new allies, new artifacts, and more. Hopefully our recent emphasis on bug fixing has been apparent to everyone, and I can promise that focus will continue, too. 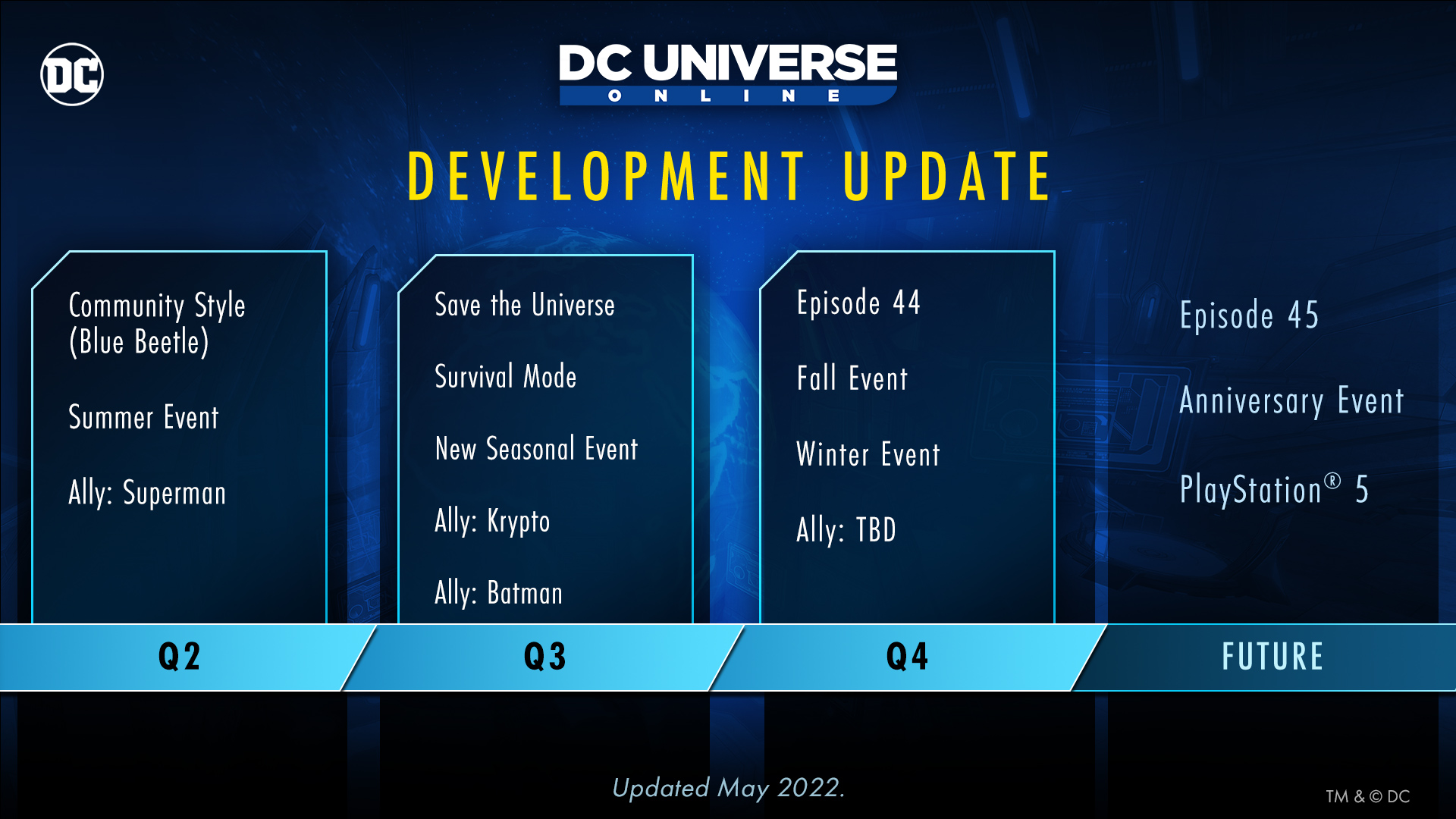 Thank you for reading this May 2022 Development Update and for being a part of our DCUO family. Please join the discussion on the official forums and let us know what you think.