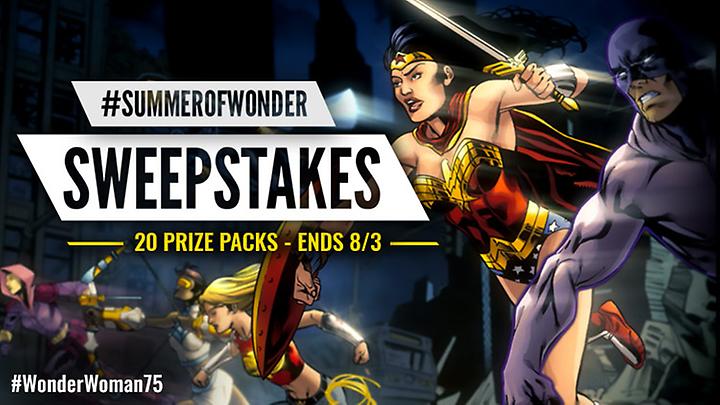 Join us on Twitter to celebrate the Summer of Wonder, and you could win one of twenty (20) prize packs! 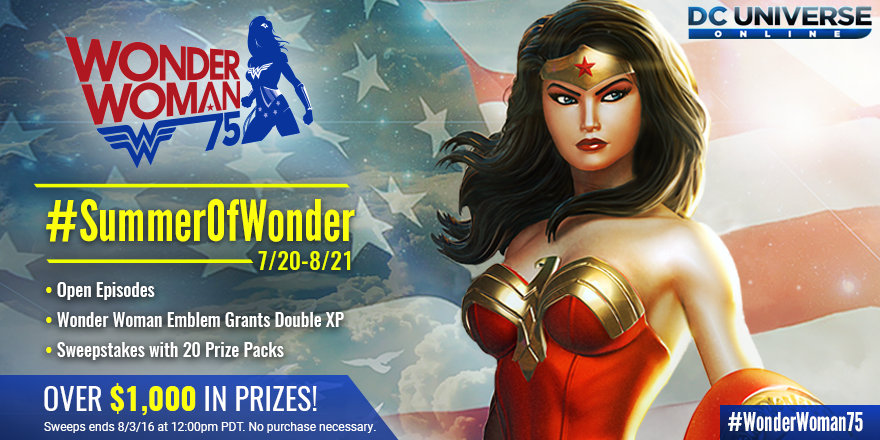 Each of the tweets will also use the hashtags #SummerOfWonder, #WonderWoman75, and #sweeps. There will be three (3) separate tweets; keep an eye out for all of them!

Here’s what you need to do:

Since there will be three separate tweets, you have three opportunities to enter (once for each tweet).

Here’s what you could win:

After August 3, we will be drawing twenty (20) winners from the eligible entries. Those selected will win either one of five (5) Grand Prize packs or one of fifteen (15) Second Place Prize packs. Here’s what’s included in each:

NO FEE OR PURCHASE NECESSARY TO ENTER OR WIN. THIS PROMOTION IS SUBJECT TO ALL APPLICABLE LAWS. VOID WHERE PROHIBITED. : The Sweepstakes is open to everyone eighteen (18) and over at the time of entry who are legal residents of the fifty (50) United States and District of Columbia (excluding Puerto Rico and other U.S. territories and possessions), except employees (including their immediate family members and persons living in the same household), officers, directors, and agents of Sponsor, Votigo, Facebook, Twitter, and Instagram and their respective parent companies, affiliates, subsidiaries, advertising, promotion, and fulfillment agencies, who are not eligible to participate in the Sweepstakes.

Previous Article
Mid-Year Development Update
Back to List
Next Article
The Summer of Wonder!