Hello Super Heroes and Super-Villains. I'm here today with (what will be) a regular development update, where I'll share what the team has been working on and what's coming up. My goal is to be as open and transparent as possible in sharing what we know or expect to be true - as of right now.

Let's kick things off with the biggest news for those of you who might not read the whole update.

First up, I can confirm we will make all episodes free to all players before our next major release later this summer.

As you know, Episode 40: World of Flashpoint was just released free to everyone, all episodes have been open (available to everyone with longer loot locks) since last March, and new episodes have come with free limited-time event versions for years.

These experiments have only shown us positives as more players are able to get right into content without barriers, so on we go.

Second and at the same time, membership will see a substantial update as well. Part of this update to membership will directly address replacing members' access-to-all-episodes benefit and then some.

We want membership to be a great value that is worth more than it costs, but that also doesn't feel required to engage in the game. We have many ideas and we have been reading yours, too. Now's the time to speak up if you haven't already.

With that out of the way, let's talk about where we have been and where we are going.

The last few months have been exceptionally busy, both on live and internally. If you're just checking back in after some time away, this will get you up to date.

January kicked off with more than its usual anniversary bang. The Attack of the Anti-Monitor event came back with an entirely new, episode-style raid that featured event, normal, and elite versions. This raid also stayed enabled for an extended period of time for all you raiders out there, right up until Survival Mode Season 2 launched.

Survival Mode Season 2 launched in March as a continuation of what we started in Season 1 with new bosses, items, and styles. We saw a ton of activity surrounding Season 2, some of it controversial, and developed several new methods to combat cheaters that helped us here and will continue to in the future. I won't get into the details of that here for several reasons, but rest assured cheaters frustrate us at least as much as they frustrate you. 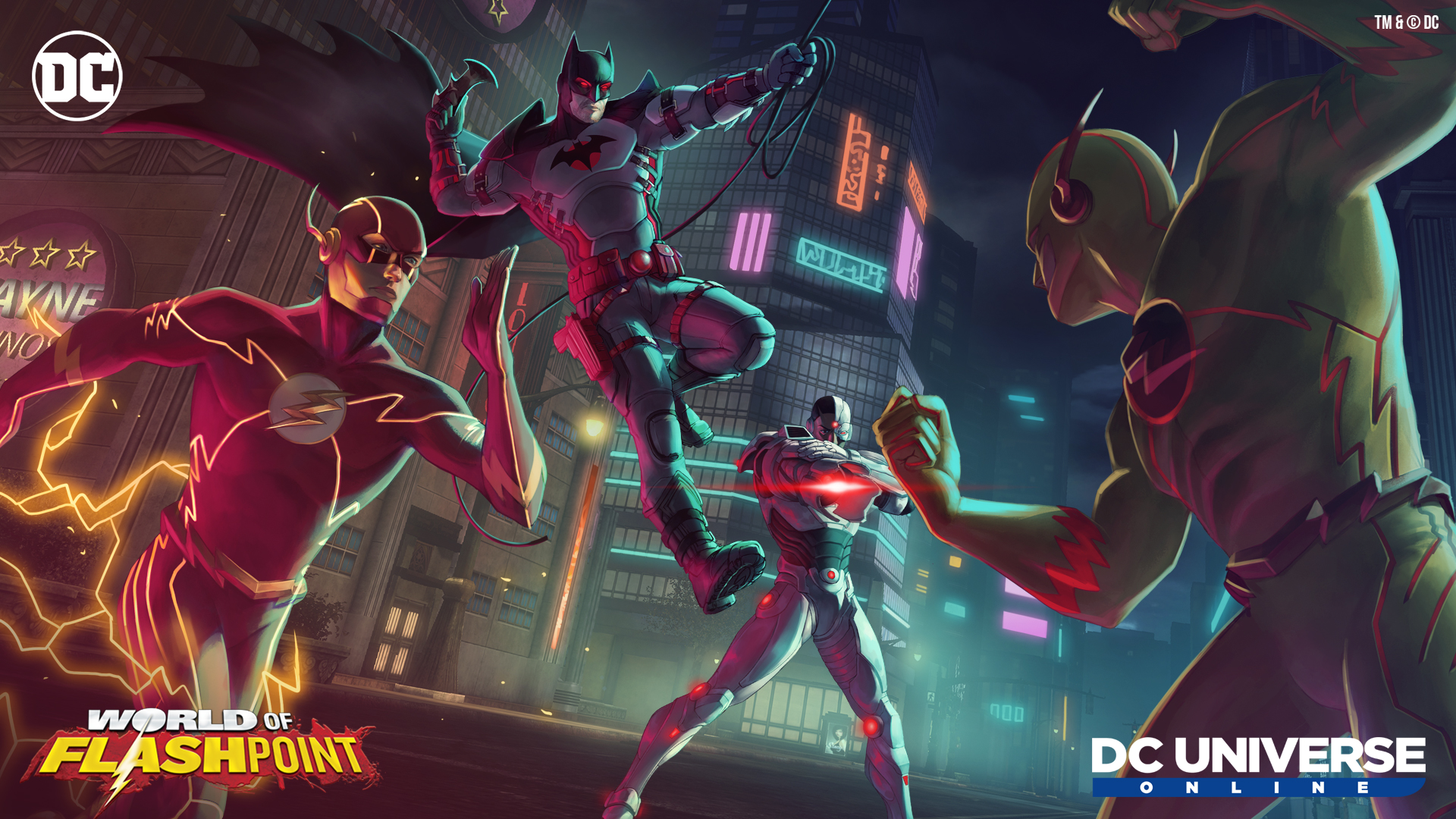 Survival Mode ran through the launch of Episode 40: World of Flashpoint. For this free episode, we focused on one of the most iconic DC storylines with Flashpoint, returned to a more traditional episode format - open world, four On Duty missions including two raids - and then took it several steps further with elite versions of every piece of content. Not only did we see the first elite duo, we did it one better with new tech that let us provide five additional levels of challenge (somewhat similar to Survival Mode) in the final raid.

For styles, we saw so much enter the game these past few months. From new Flash and Zoom-inspired styles and gifts in the anniversary event, three weeks of new Episode 39: Long Live The Legion rewards, to silly and seasonal event styles, Survival Mode's variety of rewards, and then new accessories, Flashpoint Batman-inspired styles, and Raven-inspired styles in time capsules.

Beyond what's above, the teams were hard at work on our next release after World of Flashpoint. I'm not quite ready to spill the beans there yet, but it also won't be long until I can. We will have a separate announcement with those details once we finalize a few more decisions.

I can say that the design teams completed paper designs for features and content in the next release, the engineering team just started tackling tech requests that came out of those designs, and the art team - well, art has been working for a while now already. They have a big task ahead of them.

Also of note, so many plans. The content and narrative design teams completed narrative plans and the art and design teams fleshed out style and gear plans, both through the end of the year.

Engineering began a major client and server performance task to make how we handle text strings more efficient - as in, how we store, access, and display all of the text you see on screen. If that's not riveting enough for you, here's what is: text strings - like the one I'm writing now - use some of the oldest, least efficient code in the game and they are everywhere.

The potential for performance improvement is tremendous - a near astronomical amount of text constantly whips through the servers - but unraveling such deep code is complex. I mean, it's a twisted, hellish mess. Side note, this work is what (temporarily) broke the renown tab on live. The engineers are very sorry about that.

NEXT ON DCUO: APRIL - JUNE

Looking ahead at the next couple of months, we will bee buzzing back into the spring seasonal event (May 13) and summer seasonal event (June) with new rewards, launch a new time capsule, and of course have World of Flashpoint and other ongoing bonus weeks. You like them; we like them. We don't see any reason to stop!

NEXT AT DIMENSIONAL INK: APRIL - JUNE

In the next two months, the teams will continue work on our next release (roughly this summer) and begin the most preliminary work on the release after that (roughly this fall). We will of course also continue the work on the membership update and making episodes free for everyone.

The art and community teams will work on the next phases of the Community Style Initiative. Your votes are in and I am pleased to announce that the winner is Blue Beetle (Jaime Reyes) as the character we will base a gear suit on! Azrael came in a close second, losing by about 2% of the final vote.

Art and design will finish up the bonus weeks and extra rewards for World of Flashpoint, as well as begin work on booster bundle 14 and time capsules 21 & 22 for release later this year.

Engineering will continue work to improve server performance, including work to address why performance degrades over time on our busier worlds and our need for daily server restarts. Fun fact, the next issue to address involves us needing more and bigger numbers in essentially all server code. Like the work on text strings above, this is also quite the undertaking in code this deep and prevalent. Apparently we use numbers even more than we use text. Crazy right?

Finally, I am pleased to share that work will begin in earnest on our PlayStation 5 native client as we continue toward a (not just PS4 backwards compatible) launch on this next-gen platform. Please note that this will essentially be a port with a few minor improvements to the new console, not a major overhaul or graphics/engine upgrade yet.

NEXT ON DCUO: JULY - THE FUTURE

Finally, looking even further ahead, we plan to launch our next two releases, introduce a new major feature, roll out that membership update and free episodes, bring back the fall seasonal event (October) and winter seasonal event (December), and follow through on the Community Style Initiative.

If paragraphs aren't your thing, jump into this Calendar with the latest we have on dates and timing. 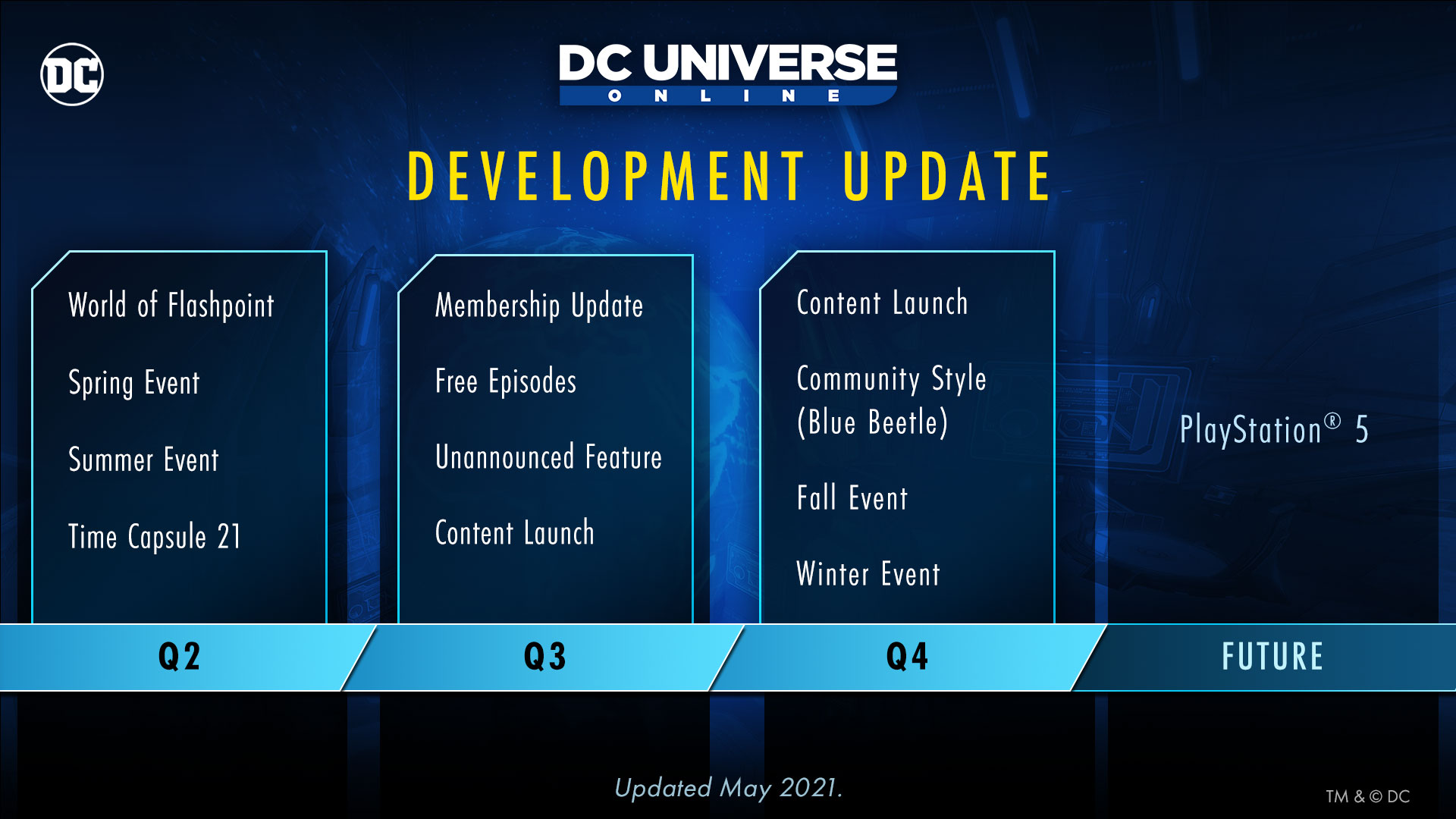 Thank you for reading this May 2021 Development Update. Please join the discussion on the official forums!