Hello! Welcome to DCUO's 12th year! Please read on for your February 2022 Development Update to learn more about what the team has been up to and what's next for DC Universe Online.

2021, oh how we miss you already. October and November brought us the Wondrous Time Capsule, Wonder Woman-themed Save the Universe content, Wonder Woman Day gifts, Fall Fest, the Witching Hour, a Booster Bundle, all kinds of sales and bonus weeks, and new daily rewards. December kicked off Season's Greedings, more sales, and of course Episode 42: Legion of Doom!

Legion of Doom felt like a great way to end the year and kick off the next - and not just because of the impending doom we face in the world! Villain-focused episodes always feel special, and taking this set of villains into real-world locations like Washington D.C. really added a spark to what was in many ways a traditional DCUO episode. We hope you enjoyed it as much as we did.

January flew by with more daily rewards and the anniversary event and gifts. So many gifts. We were also very pleased by the response to the new House of Legends lair and the new dormitory area. Keep sharing your bases with us!

NEXT ON DCUO: FEBRUARY-APRIL

In the next few months, we'll have returning Valentine's Day and St. Patrick's Day seasonal events, a new Time Capsule, and a new ally: Bombshell Harley Quinn. We will also see the launch of updated Daily Rewards and Custom Play (On Duty) interfaces, and continuing refinements to Omnibus, with a focus on balancing scaled elite content.

And before you know it, April will be here with the launch of Episode 43: Dark Knights! 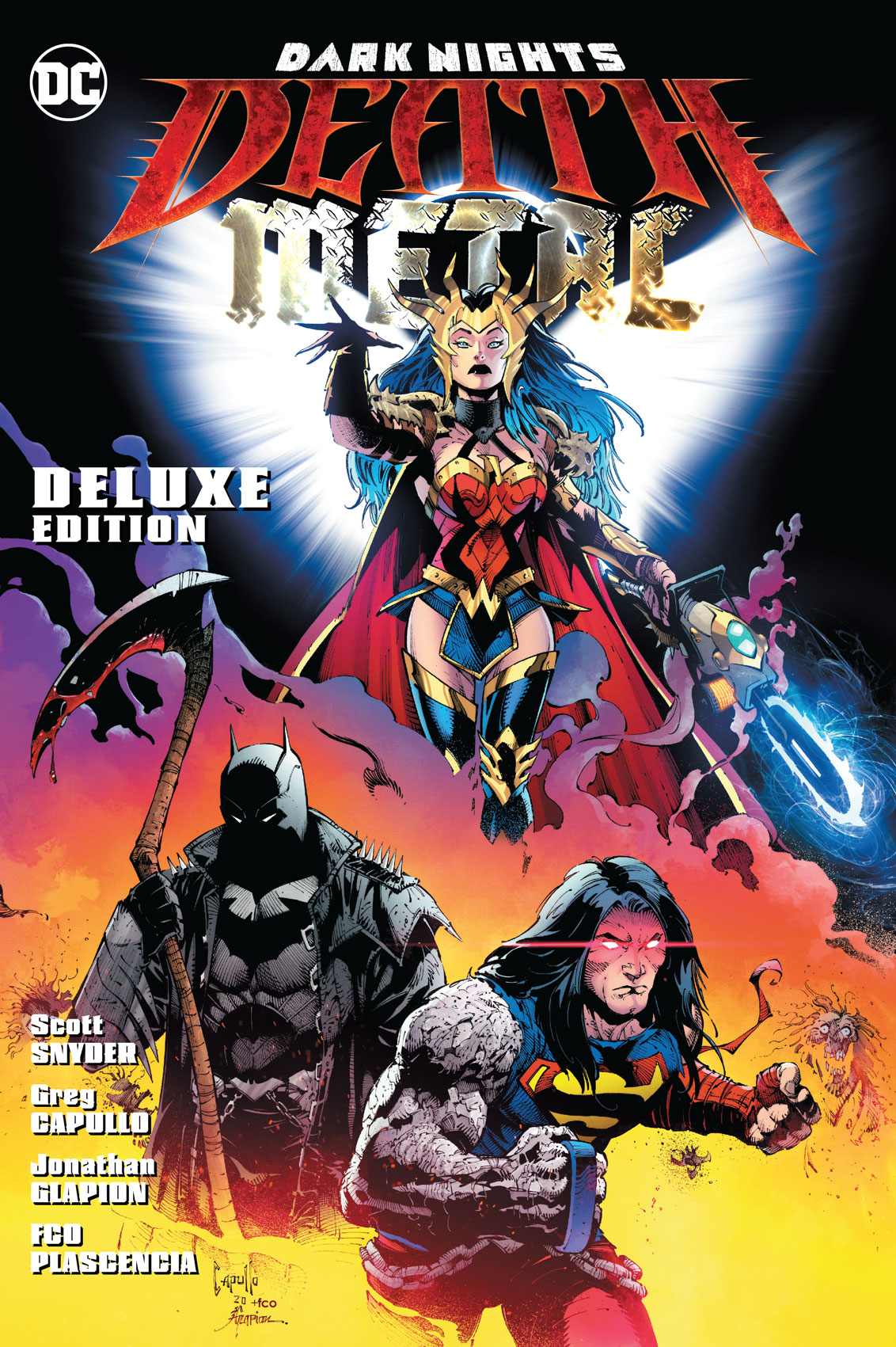 This is the end. The world's finest have failed.

Perpetua has escaped the Source Wall and is remaking the Multiverse, destroying good worlds and siphoning power from evil worlds. She has turned The Batman Who Laughs loose to create his own twisted realities. And with this kind of power, nothing and no one can stop her.

That's where you come in. A desperate alliance of this world's heroes and villains are meeting in a battered Washington D.C. to plan an attack against Perpetua and her sources of power. Stand and fight, or all worlds will fall.

DARK KNIGHTS is a direct continuation of the stories told in LEGION OF DOOM and a conclusion to the events that began in METAL PART I, METAL PART II, BIRDS OF PREY, WONDERVERSE, and HOUSE OF LEGENDS.

Rob's Take: "The only thing more exciting than getting to tell a story over this many episodes is finally getting to end it. This will be an explosive conclusion with an enormous cast of DC Super Heroes and Super-Villains, and our players at the center. Players will face not only Perpetua, but the gathered Dark Knights, and the stakes could not be higher." - Rob "Charon" Frazier, Lead Content Designer

THINGS TO KNOW ABOUT DARK KNIGHTS:

EPISODE 43: DARK KNIGHTS will launch in April 2022 on PC, PlayStation 4, Xbox One, and Nintendo Switch.

NEXT AT DIMENSIONAL INK: MAY-JUNE

Moving on! It goes without saying that when Episode 43 is complete, we'll roll into work on Episode 44, which will be due out this summer. We will also work on a very special Booster Bundle, further Omnibus refinement, and this year's spring and summer seasonal events, with new rewards the team is way too excited about. You should see the amount of jaws dropping in each of these planning meetings.

Perhaps even surpassing that level of excitement, though, the team will begin work on everyone's next favorite ally: KRYPTO! Good dog!

And finally, really, the community-requested Blue Beetle style will finally, really, launch for everyone in June as part of Doctor Fate's Daily Rewards (for everyone). It has been a long road and we look forward to both sharing the style with you and how we got from concept to something we can wear in-game.

NEXT ON DCUO: JULY - THE FUTURE

In the second half of 2022, we are planning for Episodes 44 and 45, a native PS5 client, new allies and artifacts, and at least one more new lair. We are also working on a NEW seasonal event and a NEW feature system that I wish we could talk about right now!

Of course, the traditional seasonal events will return, too, and we'll continue to refine our existing systems, fix bugs, and slip in your feedback everywhere we can.

That's this year as we have it right now. More on the future as we live it. 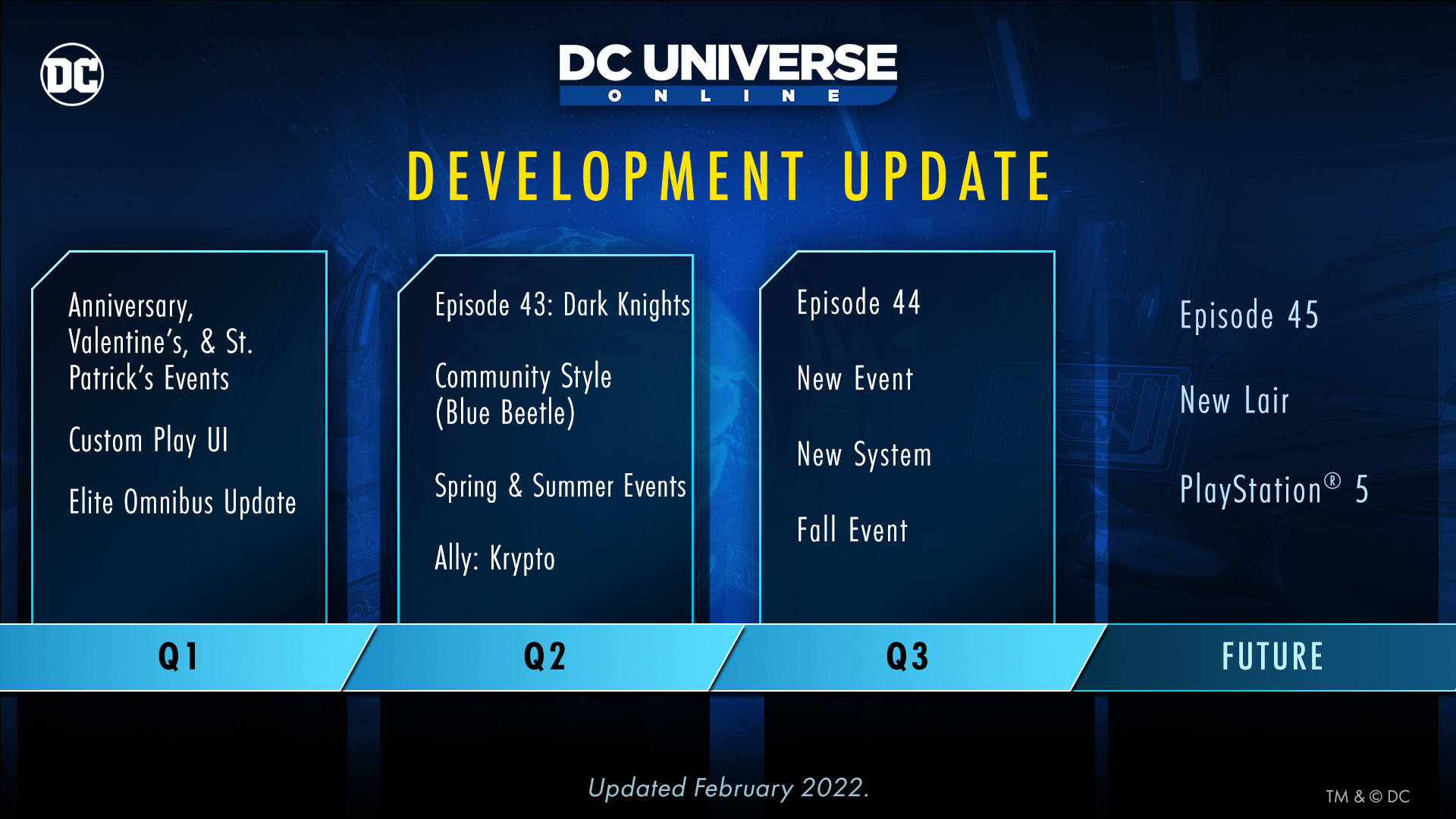 Thank you for reading this February 2022 Development Update. Please join the discussion on the official forums and let us know what you think!