Hello Heroes and Villains! Please read on for your September 2022 Development Update to learn more about what the team has been up to and what's next for DC Universe Online.

Where has the summer gone? Gone to events! Of course the Tides of War summer seasonal event returned with an appropriately shark-themed year, then we saw two new sets of Save the Universe up-leveled classics, and Survival Mode Season 3 is ongoing now as our first-ever 6-player content.

On the Allies front, we saw the Man of Steel himself, Future Lex Luthor (you know, the Luthor who got our whole game's universe started), and everyone's best friend Krypto. Good boy!

NEXT ON DCUO: SEPTEMBER-DECEMBER

The rest of this year is filled to the brim. The all-new Homecoming seasonal event will launch on September 8, 2022, featuring sisters Starfire and Blackfire, the Teen Titans, and a great party. You're invited!

Then in October we will have The Witching Hour fall seasonal event and in December the Season's Greedings winter seasonal event, both back with festive new rewards. Look out for sales, new Time Capsules, more monthly Doctor Fate's Daily Rewards, Allies, Artifacts, bonus weeks, and more as the year comes to a close.

Oh, and get ready for Episode 44: THE SINS OF BLACK ADAM, out this October! 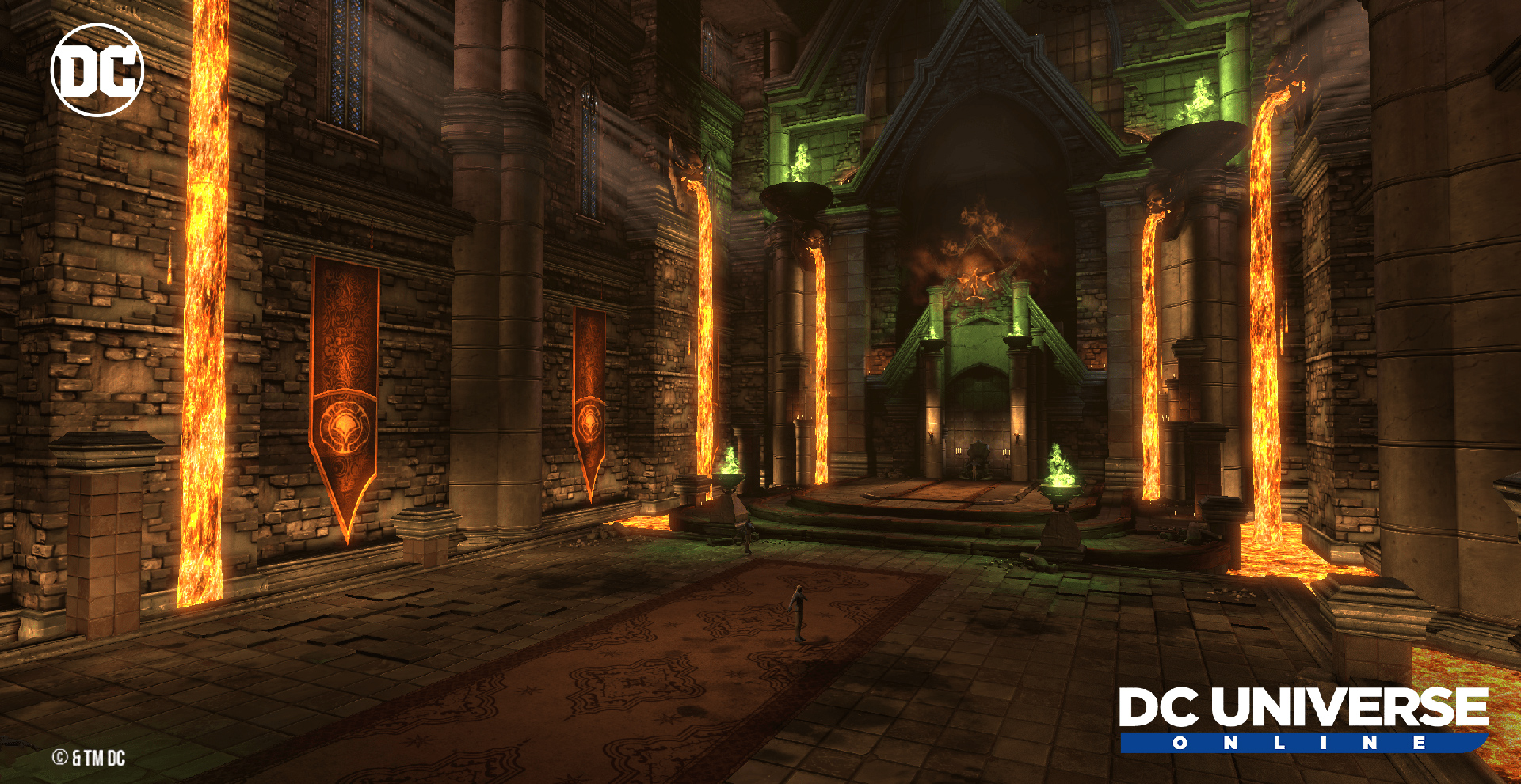 Episode 44: The Sins of Black Adam

Twice now, Black Adam has failed to resurrect and rescue his wife Isis from the Underworld. Determined not to fail again, he will enter the Underworld himself to strike a deal with Neron once and for all. But can either be trusted? And what costs might await the living as a result of those who trifle with the dead?

In THE SINS OF BLACK ADAM, it will be up to you to navigate the dangerous path between good and evil, between life and death, between love and despair.

THINGS TO KNOW ABOUT THE SINS OF BLACK ADAM:

EPISODE 44: THE SINS OF BLACK ADAM will launch in October 2022 on PC, PlayStation 4, Xbox One, and Nintendo Switch.

NEXT AT DIMENSIONAL INK: SEPTEMBER-DECEMBER

The team's focus through October will be primarily on Episode 44 and the seasonal events, but we'll quickly roll onto Episode 45, due out early 2023, new allies and artifacts, finish up the new Custom Play On Duty UI, and begin work on an updated Allies UI.

Finally, I'm excited to share that progress on our native PlayStation 5 client is showing promise. We have the game fully up and rendering, and we're into the (still very time-consuming) phase of identifying every adjustment that is needed to launch the game on a new system. I am also excited to share that work on the Xbox Series X client is underway as well. No, I don't have any dates to share yet, but we're getting there!

NEXT ON DCUO: JANUARY - THE FUTURE

Planning for our milestone 13th year is still underway and I will share more in my next update. Of course, I can say our traditional events will return early in the year - Attack of the Anti-Monitor for the anniversary in January, Love Conquers All for Valentine's Day in February, and Mister Mxyzptlk's Mischief in March - along with Episode 45 shortly after that. 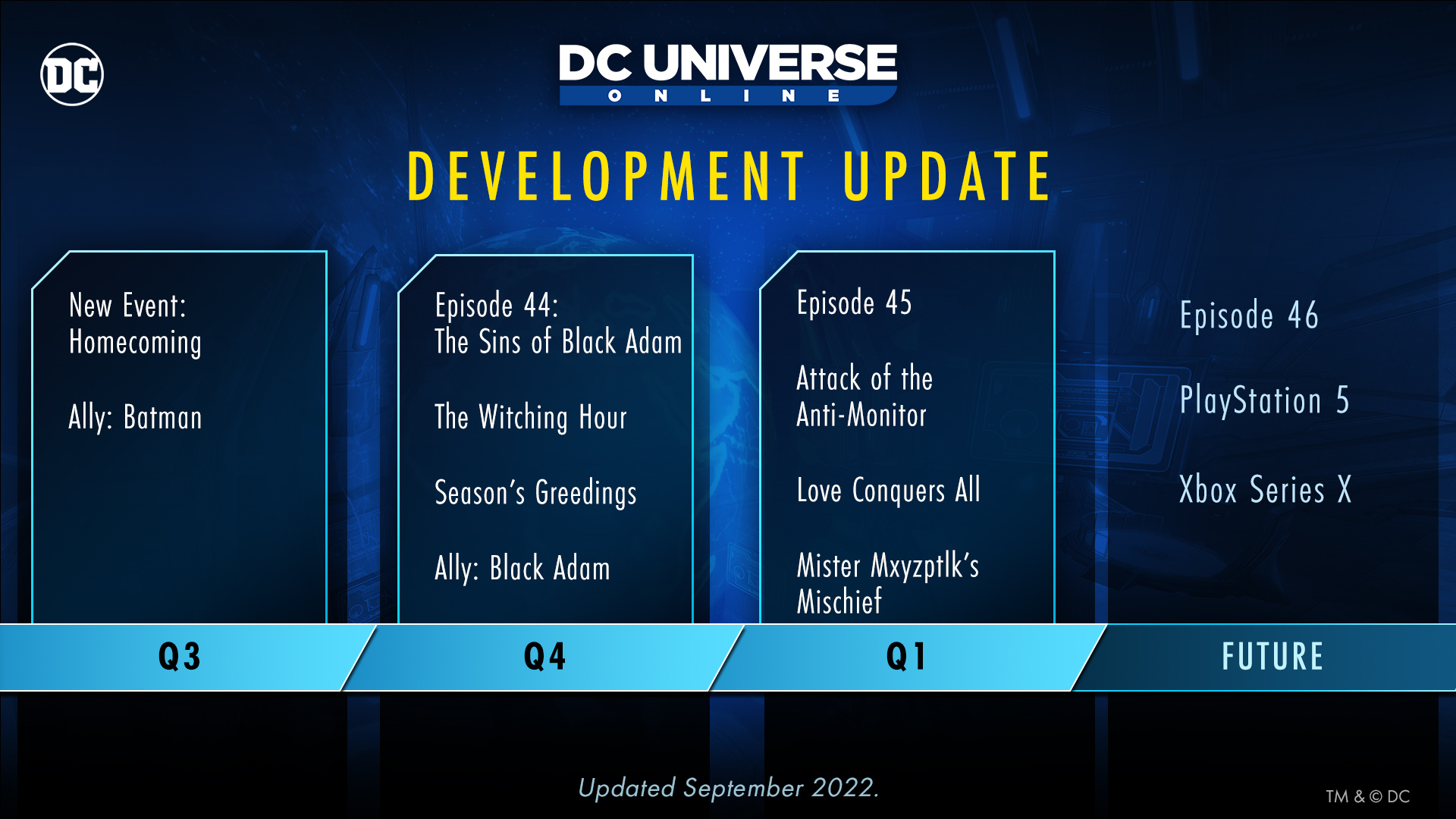 Thank you for reading this September 2022 Development Update all the way to the end! Let's have a great rest of the year. Please join the discussion on the official forums with any questions and let us know what you think.